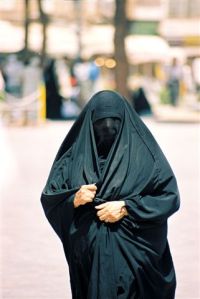 Richard Dawkins ends his written critique of faith-based religion, “The God Delusion,” by creating a metaphor between our slim spectrum of sight and the understanding of our size and significance in the universe to the thin slit in a large black burka — the rest of the fabric representing the vast data we cannot see or fathom.

According to Dawkins, the progenitors of science, such as Charles Darwin with his theory of evolution, “seized the window of the burka and wrenched it open, letting in a flood of understanding…” Dawkins explains that we have evolved in Middle World with a Middle World understanding, not too big or too small, slow or fast, by the necessary means of natural selection. The burka is a double entendre, showing both our natural limitations and the ones we force upon ourselves (by means such as religion), like an actual burka.

In closing this chapter, appropriately titled The Mother of all Burkas he states, “We are liberated by calculation and reason to visit regions of possibility that had once seemed out of bounds or inhabited by dragons.”

Could we, by training and practice, emancipate ourselves from Middle World, tear off our black burka, and achieve some sort of intuitive — as well as just mathematical — understanding of the very small, the very large, and the very fast? I genuinely don’t know the answer, but I am thrilled to be alive at a time when humanity is pushing against the limits of understanding. Even better, we may eventually discover that there are no limits.

This is a vision I also find attractive. Unhindered by superstition and unsubstantiated beliefs, the collective understanding of humanity can advance in all scientific, philosophical, and even spiritual fields. Unfortunately, there are many obstacles on the road to knowledge and more still for the greater well-being of people.

This article is not about religion, faith, or indoctrination. This is an exposition into a case of human vice.

Our tale begins in 1980 when a landmark decision by the United States Supreme Court was made in the case of Diamond v Chakrabarty. Up until this point, it was understood that living things are not patentable subject matter. This was until Dr. Ananda Mohan Chakrabarty, a genetic engineer, developed a bacteria that had the ability to break down crude oil and requested a patent for the bacterium. Initially, he was turned down. But after a series of appeals from both sides of the case, it was officially settled in the Supreme Court.

The Supreme Court reversed the prior understanding ruling that a “live, human-made micro-organism is patentable subject matter under § 101. Respondent’s micro-organism constitutes a ‘manufacture’ or ‘composition of matter’ within that statute” — leading to an eruption of biotechnology institutions and corporations patenting various cloned, isolated, artificial, and identified genes. Utah-based Myriad Genetics, Inc. was one of these biotechnological institutions that grew into one of the titans of gene discovery and diagnostics as a result of this ruling.

Bioethicist, Dr. Bryn Williams-Jones observes in his article History of a Gene Patent: Tracing the Development and Application of Commercial BRCA Testing, that

The Myriad case is a harbinger of an increasing number of instances where gene patents provide companies with monopolies on the development, marketing, and provision of genetic tests and therapeutics…this case has become a focal point…for debates about the social and ethical implications of DNA patenting and the commercialization of genetic tests.

BRCA1 (breast cancer 1, early onset) is a human tumor suppressor gene, which produces a protein. This protein is found in the cells of breast and other tissue, where it helps repair damaged DNA and destroy the cell when DNA can’t be repaired. If the BRCA1 gene is damaged, the damaged DNA can let the cell duplicate without control, and turn into a cancer.
Myriad Genetics held the patents for the BRCA1 and BRCA2 genes meaning that they have the right to prevent anyone from studying, testing or even looking at a gene. They can open up testing for free or charge outrageous sums of money for such testing ($3000, perhaps).

A friend of mine is afflicted with a mutation of a similar type. If this gene was patented and those suffering it’s mutation were extorted in the way those with the mutated BRCA1 and BRCA2 are, it’s possible that I might have already had to attend my friend’s funeral. As we can see, when science becomes a business it loses the value of a human endeavor and becomes a means to control and extort.

The American Civil Liberties Union pointed out a further problem at the core of the patents when they petitioned the Supreme Court for writ of certiorari claiming,

The human endeavor of science is impeded and the lives of many people are hindered, even being cut short, as a result of patents such as these.

The Supreme Court on Monday threw out a lower court ruling allowing human genes to be patented, a topic of enormous interest to cancer researchers, patients and drug makers.

This came as a result of a court opinion that was reached, as reported on Patently-O, only days before in the case of Mayo v Prometheus in which the Supreme Court held that “the personalized medicine dosing process invented by Prometheus is not eligible for patent protection because the process is effectively an unpatentable law of nature. This decision reverses the Court of Appeals for the Federal Circuit’s holding that the claims were patentable because they included substantial physical limitations.”

I am very happy to see that we’re taking a step back to reexamine an unjust ruling. Patenting genes, or any other product of nature, hinders scientific progress and lives. Money should not hold significant weight against the lives of human beings. Science is a human endeavor and it is more than a mere body of collected facts to be exploited for personal gain; it is a humble means to great ends. When used correctly it is a bright flame which can be used to beat back the enveloping darkness of ignorance and delusion — improving lives and livelihood. When treated by the unjust, science can be used as tool of the avaricious.

By virtue of being human, we have limitations, a burka through which we have only a thin window into the knowledge of truth and yet there are those among us who would close the window further — letting light peak in only when it would give them the advantage.